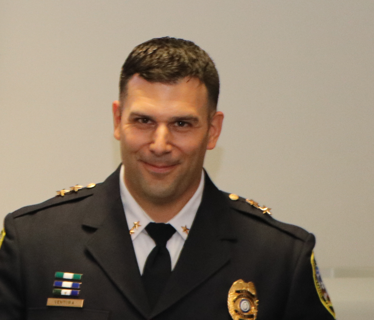 Chief John Ventura was sworn in as the 9th Chief of Police of the Wallingford Police Department in July of 2021. Chief Ventura began his career at the Wallingford Police Department in October of 2002 and has served in every capacity within the agency during his tenure. Chief Ventura served as a Detective, Patrol Sergeant, Detective Sergeant, Patrol Lieutenant, Deputy Chief of Police, and the Commander of the Cheshire-Wallingford Emergency Response Team.

Chief Ventura is a graduate of the Roger Williams University Executive Development Course as well as the Southern Police Institute: Management of the Small Law Enforcement Agency. Chief Ventura graduated from Notre Dame High School of West Haven. He earned a Bachelor’s Degree in Criminology from Stonehill College and holds a Master’s of Public Administration from Albertus Magnus College.

Chief Ventura currently serves as the Second Vice-President of the South Central Chiefs of Police Association and sits on the Board of Directors of the Connecticut Police Chiefs Association.